A Love That’s Meant to Be

Each year now since 2012 I’ve made a song video for Valentine’s Day.  I have joked that after “a few more years”, I’d have enough of these for an album.  Well, if I consider that one year I actually wrote TWO songs, I think that day is upon us!

This year, I have a very personal message for you.  You’ll understand parts of it like no one else will. And when you hear the part about the future, imagine you are singing that part to me. I just considered that as I was finishing the song and it did my heart good.

Tucson Bay – the brighter side of Global warming

OK, again, remember that HUMOR is laughing at stuff that ain’t funny.

Here’s my latest humorous song “Tucson Bay” illustrated with a few photos from friends and my own archives.

I have to give a grateful shout-out to my Accordian-playing friend Kevin from Three Points, AZ. Kevin, we love you and want you to live on playing forever!  It’s just that “Kevin” rhymes with “heaven”.  That’s all.  Really.

My make-shift studio made this hard to accomplish, so I’m looking forward to getting a quicker set-up soon!

Yes, it has been over 5 months since I blogged.  I don’t know why other than to say, I haven’t had the time.  But more accurately, I haven’t TAKEN the time.

It’s not that nothings been happening, by any means, but more like everything that’s been going on is outside my musical path.  The new house has been revealing its hidden “blemishes”. The biggest was the sewer drains. I called the plumbers to have a tub drain unclogged, and $3500 later, I had a new sewer line to the city’s tap.  Then, it took another $600 to get the tub working.  And I’ve been real busy correcting blemishes on the house we’re selling (which should close in 3 days!).  And that’s just the recent stuff.

I did get in a few musical moments, among which were performances in Arizona for a “Porch Fest” with my trio and a solo show at

the Laveen Folk Festival.  That little Festival is turning into a really nice musician’s reunion out among the cow-patties.  And it’s only 2 miles from my grand-kids so naturally, I brought my own audience.

I gave up waiting on my studio space renovation and set up a make-shift studio in our guest bedroom.  It’s cumbersome but it has allowed me to record my light-hearted global warming song “Tucson Bay” (if global warming can be light hearted, I’m the guy to do it).  Next, I’ll get to work on my new 2020 “Valentine’s Day song” for my Bride.  It’s an annual ritual.  I keep telling myself to produce an album of those love songs. Once the old house sells, and I can get some cash for a studio renovation, I just might take that on as project number 1.

Meanwhile, I’ll get “Tucson Bay” mixed and posted for your enjoyment. Just remember that Humor is “Laughing at stuff that ain’t Funny”.

Long time no see.
Let me tell you why: We Moved.
Need I say more? Likely not, but I will anyway.
I have been busy.
You never know what you have until you move it. And the corollary is that you never know how dirty your house was until you move the furniture out. OMG! there were spare dogs under there!

For the past year, my Bride and I had been contemplating getting a bigger house. I guess we got spoiled by the monster we owned in Casa Grande. Our little Las Cruces house was supposed to be a temporary place while we waited for some assurance that we’d stay here. But “temporary” turned into three years and the close quarters were getting the best of us. When this new abode appeared on the market, and the price was lowered below the general value of its neighborhood, we decided to have a look. It had a number of features we liked. It had 4 bedrooms providing enough space for an office and grand-kid visits. It had a “sun room” (enclosed back porch) that could be set up as a studio for me and the yard was half-again larger. We inspected it and offered a low bid that was accepted. Now there was WORK to do!

The prior owner had about 5 dogs and those critters had ruined ALL the carpet. Four walls were painted blood red and there was a DIY corner built-in shelf that dated back to when TV’s were square. It had to go along with all the faux stone facade that covered it to match the fireplace. The sun room had a sloping floor with “stage” in it – no kidding – it was built like a bunker. The electrical wiring was a do-it-yourself mess and the ancient layers of floor coverings smelled like dead animals. I busted my butt ripping that stuff out and treating the concrete.

After the painters and carpeting guys were done, the movers came on Jun 7th – just for the big stuff. We didn’t finish moving until the 5th of July. Then it was 2 full days of vigorously cleaning the old place. Last Tuesday night we signed the listing paperwork and today, there’s a for sale sign standing at the old place.

Here at the new house, we’re faced with a garage packed with so much stuff light can’t reach the back wall. About half of that stuff belongs in my studio, but the old porch needs a level floor first. My handyman wants to pour concrete, but I’m thinking a wooden floor sounds much better and is easier on my feet and ankles. It’s just one item on a long list of stuff to fix, replace or install. 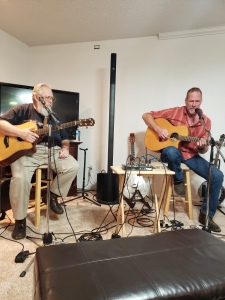 And right in the middle of this evolution, 8 days after moving in, we hosted our dear friend Eric Ramsey, songwriter extraordinaire, as he started his “Spring Soul-stice Tour”. He and I performed a housewarming concert. My daughter and granddaughters came over from AZ for the show and spent the weekend with us. The wonderful songwriter Jim Pipkin and his bride Alice came to town and we all had dinner together and a nice visit before they headed up to Ruidoso by way of the White Sands National Monument.

So now, you’re basically caught up with what’s been going on these past 2 months. One more thing – during this hectic month and a half I also wrote a humorous song about global warming that I really want to share with you. But remember the studio? It’s still in boxes. Maybe I could just do a cel-phone video. Or maybe it will just have to wait.

30 years ago on this night (about 4 in the morning 6 May, 1989) I was awakened by a phone call.  It was my mother telling me Dad was immediately going to have surgery (Aortic Aneurysm) and I should get to the hospital right away.  I got there in time to see him being rolled into the operating room.  The look on his face was to me, one of alarm and helplessness. It was as if he wanted to tell me something but couldn’t.  I spoke for us both: “I love you”.  That’s the last look I’d have of him alive.

We sat in the waiting room for hours, deep in prayer.  I had a mystical experience in that state of prayer that remains vividly in my mind to this day.  It was a scene that told me it was Dad’s time to go. Moments later, the surgeon came in and said dad had died on the table. He was 63 years old.

Two years ago I performed at the Tucson Folk Festival on May 6th.  I was 63 years old. Since my dad’s birthday was the 21st of October, and mine is the 25th, I knew that if I lived 4 more days, I’d become older than my father ever was.  That’s a strange thing for me. He was my role model. Now I had to forge ahead without that guide. There was nothing his life could tell me about growing older than 63 and a half years.

At the end of my set I asked the audience to sing with me, the last few lines of a Beatles song with me that my dad loved to sing: “When I’m 64”.  Ironic isn’t it?   He really liked that song, but never made it to 64.

This morning (Sunday, 5 May) I spoke to my mother on the phone.  She’s 93 and still sharp. I asked if she realized that tomorrow would mark 30 years since his passing.  “Oh Yes” she said, “I’ve been thinking about that”.

She went on to say that many of her widowed friends have had 2 or 3 husbands in that time, but she never felt the need to re-marry. “I had a pretty good one and that’s enough for me”.  We laughed and agreed that a new one might have brought down her average.

Grief is a strange thing.  Just when you think you’re passed it, an anniversary triggers memories and for a moment, draws you back in time.  Well, at least it’s only a fleeting moment.

Well, the Tucson Folk Festival is behind us and I feel like I finally have time to catch my breath.  March was a BUSY month with every weekend filled with rehearsals and week-days jammed with work and all the other stuff I typically handle on weekends.

Each rehearsal means 550-plus miles of driving with three hours of performance in the middle of it.  And this year, with our new bassist Larry Johnson on duty, we decided to eat up every Saturday we could.  I think it paid off. We had a BLAST!

This year’s festival was a dramatic change from past years: a month earlier, new venues, a different layout, six stages.  But man, was it GOOD.  My only disappointment was not getting there early enough on Friday to perform at the Kick-off party.

Here are some pictures we (my Bride and I) took during the weekend.  First, I’ll show US, with myself, Michael Parker on drums, and Larry Johnson on bass.  Then you’ll see some of my dear friends performing.  Then, I’ll sign off and take a nap. 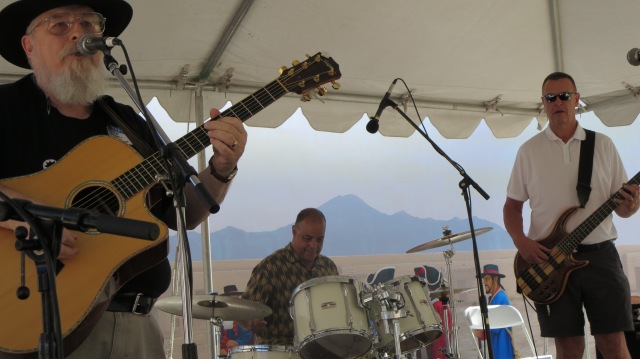 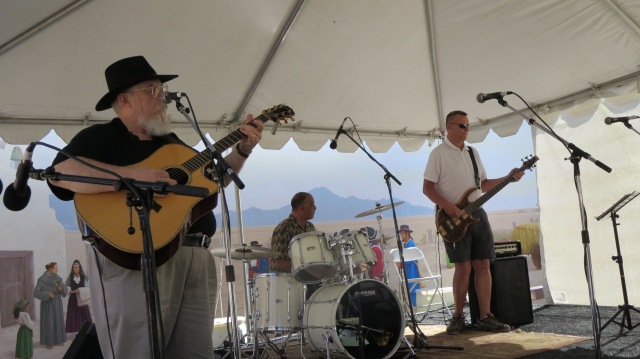 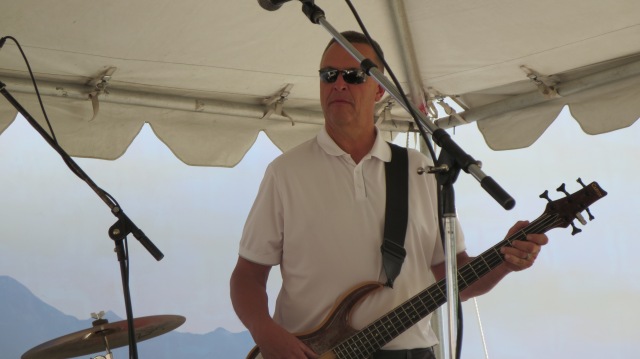 Michael Parker on drums (this was Michael’s TENTH folk festival)

Eb Eberlein at the Kick-off party

Robby Roberson and Eric Ramsey – TOGETHER!! 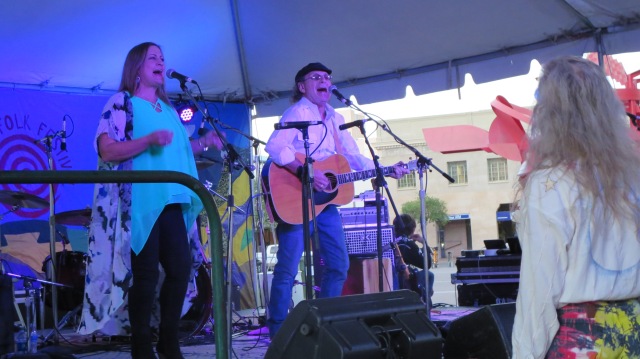 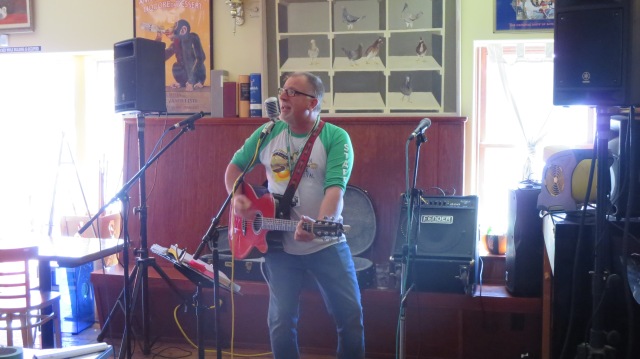 Matt Bruner hammering out sing-alongs at the Dusty Monk 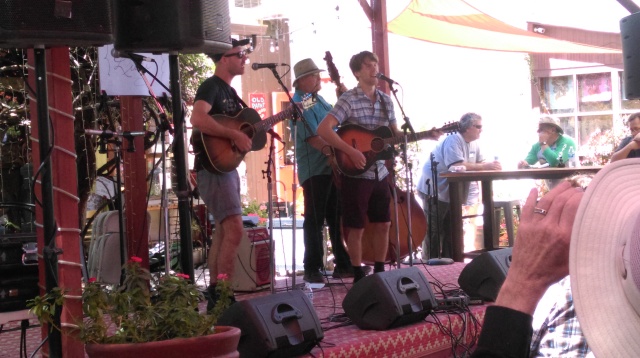 “Nick and Luke” singing harmonies like the Everly Brothers with our pal Slim Rost on bass. 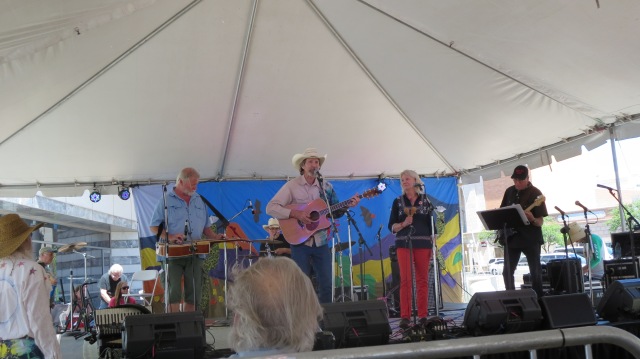 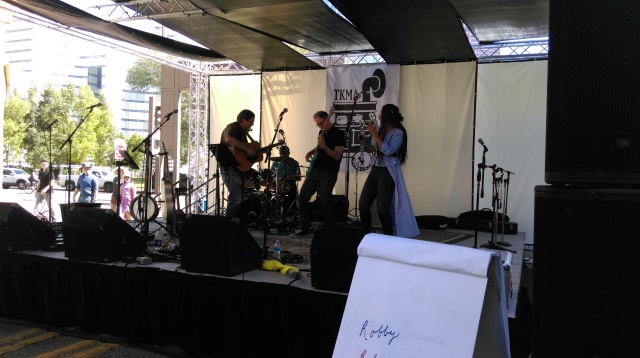 Don Armstrong and the “Whiskeypalians”

Tucson Folk Festival! See us there!

We are Ready!!  Me, Larry, and Michael that is.  Please join us at the Tucson Folk Festival this coming weekend!  We’ve got a couple new songs to start the  line-up and a few to make you dance! 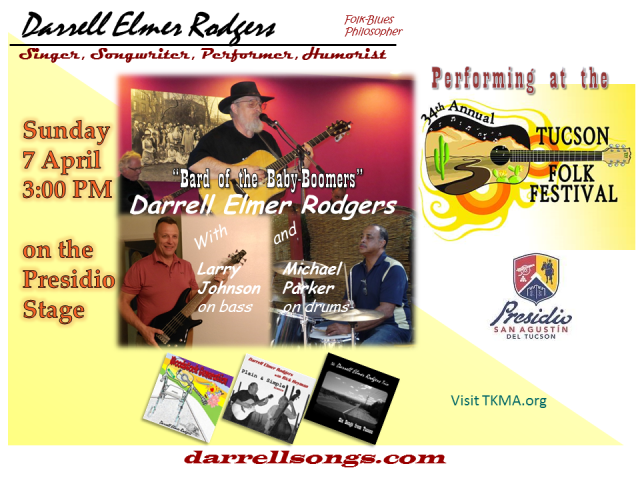 It sure would be great to see you there!  And plan to come down on Saturday as well.  It’s FREE!! and you’ll see some wonderful performers do their thing!

Click this Link for all you’ll need to know:

I highly recommend seeing Jim Pipkin on Saturday at NOON on the Presidio Stage.  Jim’s a real Pro and a great friend.  And Saturday at 2-PM on the Jacome Stage you’ll be able to see TWO of my favorites TOGETHER!  Check out Ramsey Robertson  on Facebook

Oh Man!  The schedule is PACKED with fantastic acts, all friends!  JC & Laney, John Coinman, The Morton Twins, The Determined Luddites, Eric Schaffer and the Other Troublemakers, Sabra Faulk-Sylvester – That’s just Saturday!  You’ll not see them all, but wherever you are the the TFF, there’s music!  On Sunday there’s Don Armstrong and the Whiskeypalians, Wally Lauder, The Wayback Machine, Ron Pandy, P.D. Ronstadt, and local headliner Heather Hardy!  and so many more..You just can’t go wrong.

Just be sure to be at the Presidio Stage for the Darrell Elmer Rodgers trio at 3PM Sunday!