Believing is Seeing in Flagstaff

My life-long friend Mike Lindsey, aka “Writing Bear”, Cherokee story teller was asked to perform at Macy’s Coffeehouse  in Flagstaff, AZ by his friend, the owner, Tim Macy.  Mike invited me to join him and play a few songs as part of the show. A while back, I helped Mike produce his story-telling CD “Stealing Horses”.   Mike has told stories at Macy’s before.  Usually, it’s a “stream of consciousness” type presentation.  This time Tim had asked him to create a “theme” upon which to base his stories. Mike said his theme would be “Believing is Seeing”.  It’s rather profound if you think about it.  The commonly heard “Seeing is Believing” means “I won’t believe a thing until I see it” but when it comes to matters spiritual, sometimes, in order to see, one must first believe.  It was a fun evening.  Macy’s is a great place and they have organic coffees and vegetarian food as well.

I palyed a few numbers and Mike told stories which I attempted to record, but Mike doesn’t sit still when he tells stories, so I’m sure there will be gaps in the audio (I haven’t reviewed the recording yet).

We were surprised to see a video crew there from The American Baha’i Newsreel production staff.  These folks travel the country recording Baha’i activities and events.  They were in town to film a young girl’s well-attended prayer session and having the time, decided to film the monthly gathering at Macy’s as well.  I don’t know if either of us will make past the cutting room, but we’ll certainly be watching for the next Newsreel!

Here are a few pictures from the evening:

Mike puts on his authentic Cherokee garb, including the turban-like head-dress they wore.

Writing Bear prepares the room with smoke from burning sage

Me performing at Macy's Coffehouse 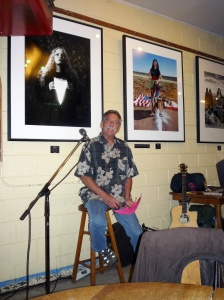 Mike and Darrell having fun at Macy's Coffeehouse in Flagstaff