The Tucson Museum of Art has been very supportive, extraordinarily so, of the Annual Tucson Folk Festival conducted by the Tucson Kitchen Musicians Association (TKMA).  I joined the TKMA 7 years ago when I lived in Tucson.  Although I now live 65 miles north in Casa Grande, when I get the chance to serve, I do. I got such a chance this past weekend and provided some music for the Tucson Museum of Art’s annual “Spring Artisans Market” which is about the best arts & crafts fair you’ll find in Tucson. I played there solo last year.

Organizer Ron Pandy, a decades-long volunteer workhorse for TKMA, had called me some time beforehand and asked if I would be willing to do it again.  I readily agreed. Ron’s schedule gives us 40 minutes to set up, perform and tear-down. For a soloist, that’s almost 39 minutes of performance time. Ron asked “will it be just you or will you have the whole band?”.  I wasn’t sure. I left a phone message for Rick Heyman and waited. If he could play bass, them perhaps Michael could drum as well. But it took a while for Rick to respond because, as I would learn later, he was in the hospital!!!  But he called last Monday and we decided we would TRY to make it a duo performance, if his good healing continued. It Did!, and after one rehearsal Friday, we performed Saturday. We managed to get about 12 songs into our time slot, including my three newest songs. 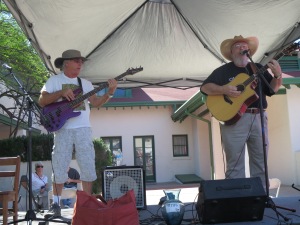 It felt good to have Rick’s wonderful bass lines dancing under my guitar and vocals. It really fills out the sound. Now we’ve set up a rehearsal schedule with our drummer Michael Parker to get the trio ready for the Tucson Folk Festival on May 2nd. And guess where we’ll be playing – The Tucson Museum of Art Stage. (3PM on Saturday May 2nd)